You are here: Home / actress nagma 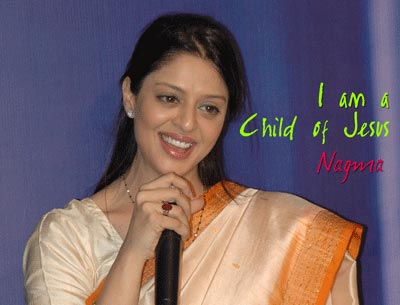 The actress, who ruled the roost in Tamil, Telugu and Hindi films from 1993 to 1997, revealed about the transformation in her life while speaking at a prayer meeting for film artistes organised in Chennai by Jesus Redeems’ ministries founder Bro. Mohan C Lazarus.

At the meeting, she is said to have told the gathering that she is ready to preach the Gospel in every city and town that the Lord takes her to. According to reports, the actress shared her testimony and wowed the audience with her knowledge of the Bible at the meeting.

Nagma told the gathering that Jesus Christ was the only super star in her life. Earlier, she made a reference to her acting career where she had paired as the leading lady with several actors in Tamil, Telugu, Hindi and Bhojpuri films.

The actress, who dabbled in politics briefly, said a copy of the Bible that she got when she was depressed and contemplating suicide saved her from killing herself. All her problems, she said, started fading away one by one after she accepted Jesus Christ as her personal saviour.

On 28th of June she attended the Thirappin Vasal Jebam conducted by Bro.Mohan C. Lazarus in Nalumavadi, a small village in Tamilnadu. Thousands of people gathered in that meeting to listen to the word of God. She led the people in worship and delivered the word of God with authority sharing her personal experience with God. People were blessed with her ministry there and testified.

Nagma Born of a Muslim mother and a Hindu father on Christmas Day.

According to Nagma’s passport, the name given to her a birth was Nandita, and it is by that name that she was referred to in an obituary printed by the family when her father, Arvind Morarji, died. Nagma thus had a Hindu father and a Muslim mother. After divorcing Morarji “due to some family problems,” Nagma’s mother later married Chander Sadhana, a film producer, with whom she had two other daughters,

Jyothikaand Radhika, as well as a son, Suraj. Through her biological father, who later re-married, Nagma has two more half-brothers, Dhanraj and Yuvraj.